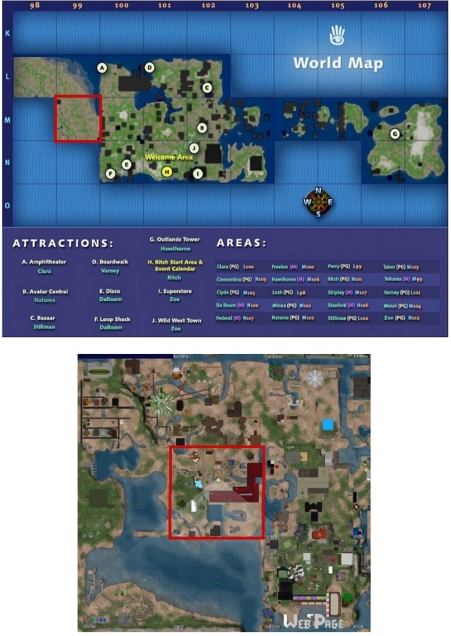 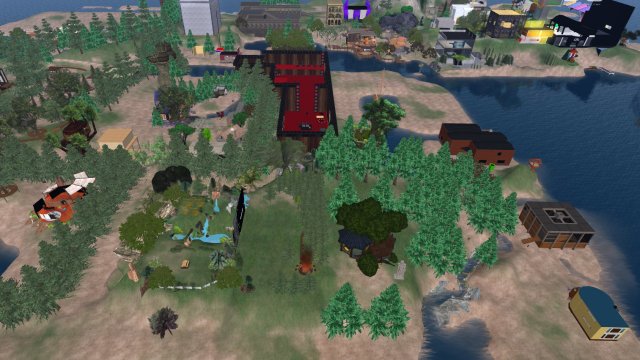 We come, finally, to the last of the First 20 — those regions which were created before Second Life went from closed to open beta.  I saved it for last of this group because, since May 2008, Tehama has been my home.

By a quirk of fate, and the existence of the basement museum at the Governor’s Mansion, Tehama also has something most other regions lack: a record, however slim, of its earliest days on the Grid.  On the map of April 1, 2003 (which will be seen with the next group of sims to be revealed in this blog), there is a red pushpin icon stuck into the northeast quarter of Tehama and labeled “Lindenberg”. 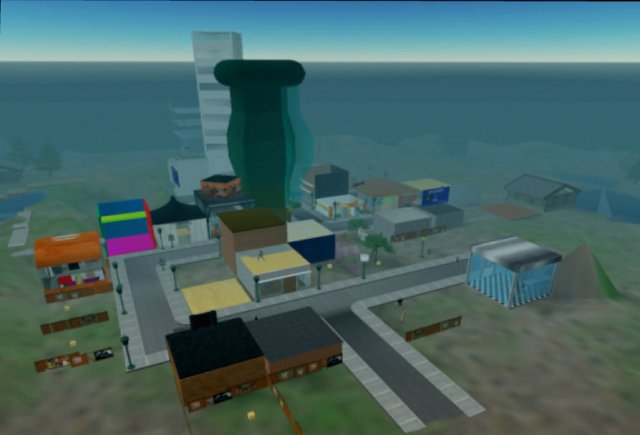 This is one of three screenshots of Lindenberg in that museum; all of them are labeled “February 03”, but carry no other information (such as, who took them).

Since beginning the writing of this entry a couple of days ago, I have become immersed in (obsessed with?) trying to determine where my home parcel might fit into the time-deep map of Tehama.  Clue #1: At the left edge of that Lindenberg photo, you can just make out a sort of stepped sidewalk.  It’s still there. 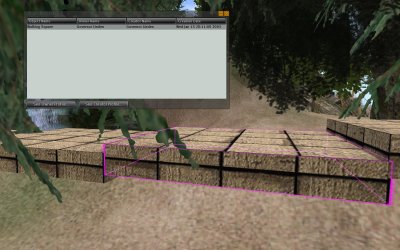 And, it’s been “Governor Linden land” since the region first rezzed on the Grid. 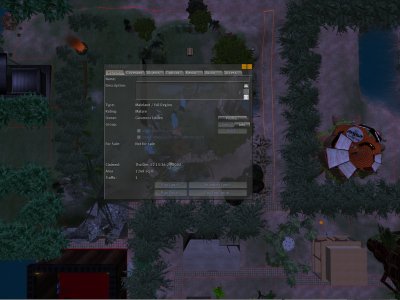 The stretch of sidewalk in question is not easy to see in the above shot (taken on the midnight setting to emphasize the property lines, with east at the top)… it’s the one running horizontally just beneath the About Land floater.  From this I deduce that the Lindenberg photo was taken from above Tehama’s eastern border with Freelon, looking west, and that the cabin appearing beyond the sidewalk sits on what now is my neighbor’s parcel.

Clue #2: After the demolition of Lindenberg (date unknown), most of Tehama was bought up by Snakekiss Noir, who built an extensive Japanese-themed park with an open-air market and her store, NeoJapan, at its western edge.

The “sidewalk of interest” is the one directly beneath the stone cliff (pieces of which also survive to the present), that forms the western edge of the square with the two circular ponds.  Compare that with this photo, taken today (July 25, 2010) from nearly the same position and angle: 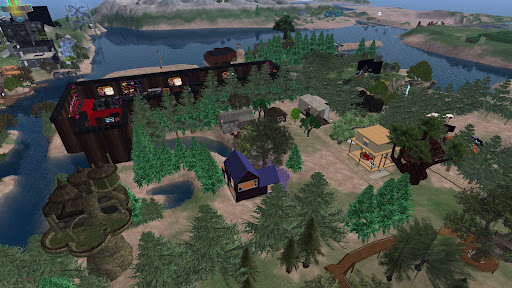 The sidewalk runs diagonally toward the lower right corner, emerging from behind the treehouse (which is about where the hill with the torii on top was in 2005).  Conclusion:  My home (the small brown cabin in the center of the above photo) sits where the southern (left) circular pond was in Snakekiss Noir’s Tehama.

That carries even deeper significance than merely confirming the approximate coordinates.  When I was a homeless nooblet (December 2007, until I took a rental in March 2008), I chose that park as a quiet spot to rez in.  It was convenient to Luskwood, where I spent all of my hang-out time. 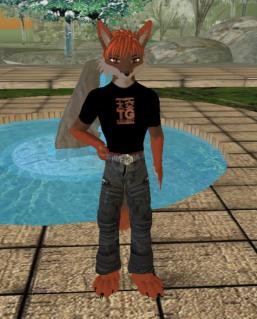 That’s one of the oldest photos I’ve ever taken — when I was still less than two months “old” — standing on the very spot where, in another three months’ time, my front yard would be.

We all know how long three months can be, compared to the way things change in Second Life.  Some time in the spring of 2008, while I was renting a tiny box of a place in the pueblo above Red Rock, Snakekiss Noir pulled up all of her builds and abandoned the land.  In the aftermath, the Luskwood Residents group snapped up a fair-sized piece of Tehama.  I heard about it, and became the second avvie to put down roots there, donating my Premium 512 (and another $5/month to make it 1024)… never realizing, until today, how precisely Fate had plunked me back down on the same piece of virtual ground.

Neither Snakekiss nor her builds vanished from the face of the grid, however… she relocated and expanded, and (with some help) established a Japanese alpine village in the region of Orelle, and parts of Livigno and Ayas.  It’s called Silk Waters Mountain. 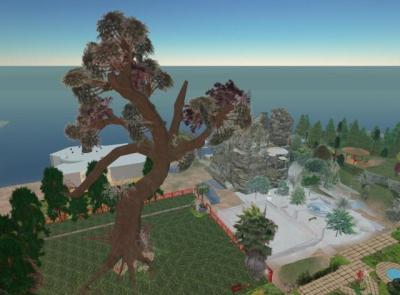 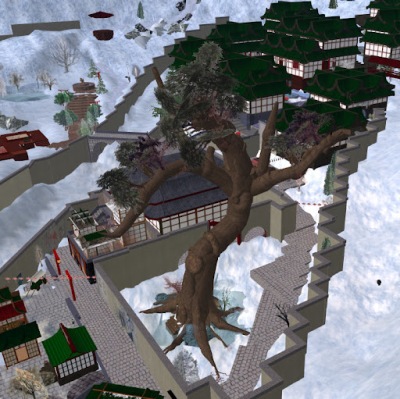 Same tree, five years later, half a continent away: built by Kelwyn Gallant (a Charter Member) in October 2004. The old Red Dragon Market is in Orelle now, too, as are some of the same rentals Snakekiss kept in Tehama.

In spite of all the geologic and social upheavals and the frequent changes in ownership (and my personal reminiscences), there is a corner of Tehama that has remained completely unaltered since December 2002. Scroll back up to the map at the very top of this post for a minute, and look at the southwest corner. See that little winding creek that cuts across it? 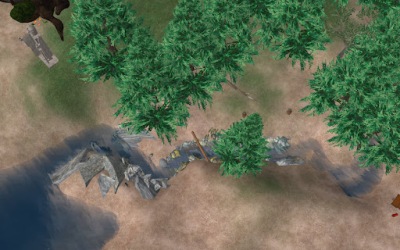 That’s right — still there.  It’s Governor Linden land, too, and it contains creations by both Eric and Ryan Linden — most notably, this unnamed statue by Ryan Linden (December 12-13, 2002): 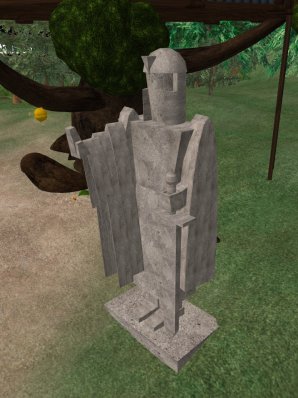 It bears no title, but I like to think of it as King Cnut trying to hold back the tide… of Time.