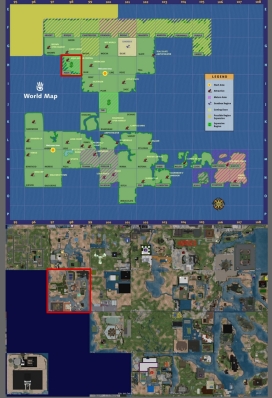 Aqua is another paradox: two of the main themes this series has developed — preservation and “benign neglect” — coexist nearly side-by-side here.  This time, however, there are no Lindens involved.

June 19, 2003, three days before the official opening: Aqua empty except for that copy of Avatar Central (also empty, it appears).  At the time, the original one in Natoma still existed. 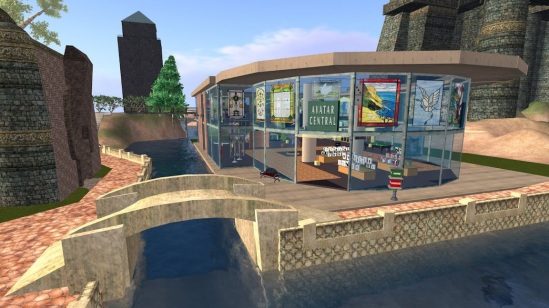 With the opening of the Luna Oaks Galleria, both Avatar Centrals were closed (and deleted). Chip Midnight’s store in Aqua is now where Avatar Central once stood.

BlackAdder York rebuilt Avatar Central in Aqua (it’s actually closer to the Natoma one in structure). Started on 2-05-2005, Avatar Central is now open again for sellers but it requires reserved spots and is not open for anyone to place objects for sale (due to prim limits).

Not only is it architecturally closer to the Natoma original, it uses copies of much of the same prims — because of that, they carry a creation date of of November 12, 2002 (by Eric Linden). BlackAdder is a Charter (a.k.a. Lifetime) Member, and the land he rebuilt Avatar Central on is tier-free, thereby preserving it… and whatever is for sale inside it, including Buck Weaver’s stained glass, which can also be seen in surviving photos of the Natoma Avatar Central.

Since the quote above mention Chip Midnight’s store, here it is (the main store, you may recall, is in Freelon):

Now, about “benign neglect”…  Some creations, like Buck’s stained glass, never go out of style.  Others, like clothing or alternative avatars, get left behind — not only by changing tastes but by technology.  We’ve seen an example of this already, at “Classic Clothing” in Hawthorne, but Aqua holds two prime examples as well.  The first is displayed inside Avatar Central:

By Marcos Fonzarelli, all vintage 2004, and all at their original prices.  Would you pay L$700 for a six-year old robot av?  I didn’t think so…

And this one is just… Swell: 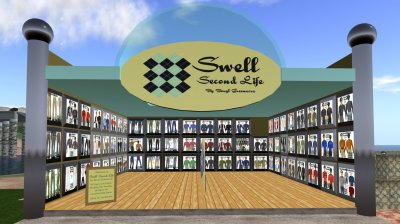 By Beryl Greenacre, all vintage 2005 system shirts and pants, most with the sort of preppie look you’d infer from the argyle logo.  They’re only L$ 50 apiece, but still… when do you suppose was the last time one was purchased?

I am simply baffled by the idea of someone taking the kind of time needed to texture those system templates, build a store and the display signs, and set it all up… and then walk away from it.  Beryl’s not a Charter; she’s paid tier on that land every month for 5 years, one would assume, and not once in those 60 months has she done anything new.

Sure, I get the idea that someone who likes making stuff might open a store and not worry about revenue from it covering tier — the prefab business Alisa and I have in InWorldz is exactly like that.  The difference is, we love to make stuff.  There’s always something new materializing on our build platform, a prim at a time.  Who whips up one batch of clothing and then quits?  Beryl does, I guess, and she’s not alone; there’s another place like this in Dore: same year, different owners, never updated.

As the King of Siam says, “It is a puzzlement!”

Speaking of unfinished business… more than 3/4 of Aqua is owned by Web Page, the same guy who has an empty mall in Da Boom with his name in big white letters 300 or so meters above it.  Besides the stuff you can see on the ground, he’s got three more in the air over the southern half of the sim (the underwater part enclosed by the jetty). 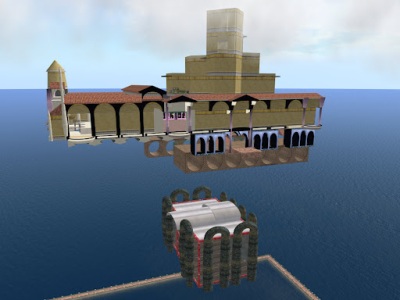 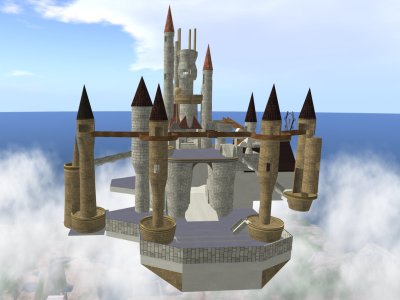 Think what you may of the aesthetics… They’re huge, poorly constructed, and have remained in that unfinished state since 2008.  It’s his land, of course — he can do anything he damn well pleases with it.  But it does make you wonder about people who pay Linden Lab month after month for years without, apparently, doing any damn thing with it.

But, I’ll give Web credit for this — his neglect and/or absence enabled me to find this, abandoned in the sky near the border with Gray: 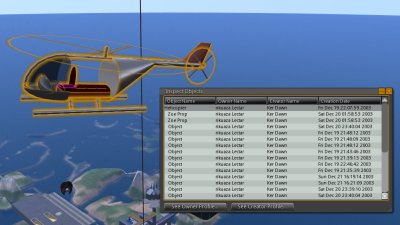 No idea how long it’s been there (I didn’t look at the owner’s profile).  I’m sure it’s just another one of hundreds of abandoned freebie vehicles you can find all over the Grid, left behind by their noob owners when a failed sim crossing forced their viewer to crash, on land owned by people who don’t check for that sort of thing.  Whatever… by virtue of its creation date, this particular piece of flotsam is the oldest object in Aqua outside the walls of Avatar Central.

You see, it’s not just the physical-world archaeologists who learn as much going through ancient trash as they do digging up palaces.