The story of Blue’s beginning is the story of another community project no longer there.  Unlike Little Tokyo (Sage), Venice (Bonifacio) or “Native American Village” (never even appeared on the map of Oak Grove), all vanished with almost no trace… also unlike Yamato in Dore, where the buildings remain but few know why… Americana is remembered.   Memorialized is more appropriate. 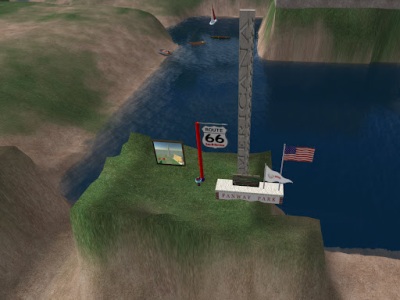 It feels, in retrospect, that my travels through the oldest squares of the Grid have been leading me to Blue.  Many of the names I first met elsewhere were part of Americana: Garth and Pituca FairChang (Taber); ramon Kothari and Sinatra Cartier (Shipley); Joan and Harald Nomad (Kissling)… most of all, Sinclair Valen, whose land in Lusk is yet another memorial to Americana, complete with souvenirs you can still buy.

Besides the Gateway Arch, which Sinclair moved to Lusk, and the pieces parked on the plateau, all that’s left of Americana is this empty car showroom, built by Bonecrusher Slate and preserved on land owned by ramon (a Charter Member):

Inside, the vehicles are gone, but you can still get a notecard at the reception desk about the 2004 models; it’s dated November 16, 2003.

Research leads me to think Americana was not without its detractors.  For instance, if you search the SL Wikia for it, you get this:

Americana refers to physical culture associated with the of the United States, and in particular the popular history and folklore resultant from its colonial, agrarian and manifest destiny periods. Examples include county fairs, American Gothic Architecture, the “Old West” and artifacts associated with the American Revolution.

In the Context of Second Life, Old West roleplaying and items, including horses and costumes, as well as full simulators devoted to Western roleplaying are common.

… which makes no mention at all of the community project. However, the Wikia’s entry at Blue is more revealing:

During the days of Beta, the land of Blue sim was purchased by a group dedicated to the theme of “Americana”. Founded by George Busch, this group produced an assortment of builds modeled after American pop culture, travel destinations, and national monuments. The group was often fraught with discord, but their creations brought visitors from all over SL.

The Americana group briefly made news inside and outside of SL as they staged an in-world “tax revolt” to protest land and primitive building/support costs. Though the protest was mostly tongue-in-cheek, at times the rhetoric was fairly intense and some other SL residents did not appreciate the approach taken by Americana members.

The former Hamlet Linden covered the situation in New World Notes, in three articles (August – September 2003) now consolidated into one:

In late July, a cadre of outraged Lifers began agitating against the Linden tax system, which they see as unjustly penalizing ambitious builders, who contribute so much value to the world. By August 2nd, their cause had broken out into open protest. The first blow was leveled on Americana, the user-driven project to recreate famous US icons in a city space. Dissent appropriately took a very American form: the project’s Washington monument had been replaced by a giant tower of tea crates; the baseball stadium rendered unusable by similar stacks; the Route 66 gas station set ablaze…

Crates and signs were festooned everywhere — there, and throughout the world. Contacted by New World Notes, Fleabite Beach — the iconoclastic kitty who leads this revolt — here pleads their case to the general public:

The thoughtful consideration and realization of a means by which all Loyal Subjects can work toward the greater goods of community, god and country without the abdication of their moral relevance. We cast our voices upwards, as we think is right, but we should not be vitally concerned that right should come of it, only that our voices are heard and respected. Without true Representation there is nothing in SL but pixels that labor to arrange other pixels for the glory and prosperity of Kings.

In an obscure museum in a sim nobody’s heard of (I-World Island), which also houses Second Life’s Oldest Object, this communication to Philip is preserved:

Created by Fleabite Beach on August 28, 2003 — two days after the NWN article was first published.  That’s a tea crate in the background.  It is my firm opinion that the Americana tax revolt of 2003 was much more in the spirit of the original Boston Tea Party than the current movement with the audacity to usurp the name.

Thing is… from the perspective of anyone who joined Second Life after December 2003, the system Americana and others were protesting is completely incomprehensible*.  That was when Version 1.2 of what we now think of as ‘the viewer’ was released, and the land ownership** system — with its prim allocation per parcel — that we’ve lived with ever since was first introduced.  Too late for Americana, though.  The Wikia entry for Blue ends like this:

The sim continued to exist as a coherent theme until the release of SL 1.1, after which the revised tax systems made it impossible for the group’s members to continue holding the entire sim. […]

Blue later became home to an amusement park and a large mountain.

Part three of Hamlet’s article is an interview with Peter Linden, who said:

“Virtual economies are really hard to do right.”

* — If you want to find out just how incomprehensible that old tax system was, have a look at the Release Notes for Version 0.5.0 (open-beta, under which the Americanans joined) and Version 1.1.0 (which “clarified” it).

And, as always, many more photos of both historical and contemporary Blue can be found in my online album companion to this series.