I have no use for Pathfinding on my home parcel. I don’t intend to ever make a “character”, let alone set it wandering like the undead, then rez obstacles in its track for the lulz. :P But hey, there’s a lot of stuff I don’t do: scripts, sculpts, animations, textures… I’m a primslinger; I make buildings out of blocks.

I know it’s gonna be buggy as hell: it’s a Lab product. But I also know that’s not going to get in the way (much) of the people who have been waiting for capability like this.

And that’s a good thing.

People have been building games in Second Life for nearly as long as the Grid has existed. When I read Inara’s precis of it, I thought immediately of two ancient examples of “pathfinding”. The first was “Vorago”, built on Varney by Tcoz Bach in December, 2003:

“Was”, as in no longer there. The house in the lower left corner of this overview, ban lines and all, replaced it.

The second is “Medieval Crusade”, built on Immaculate by Tedd Tigereye in January, 2004. 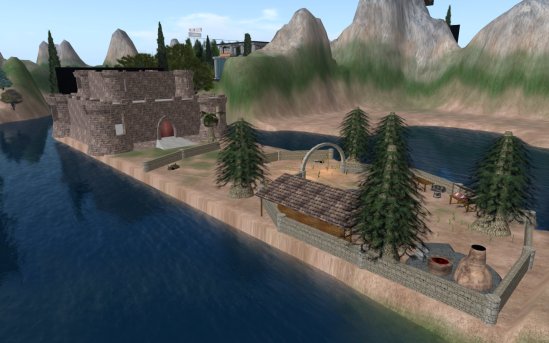 Watch out for these guys!

It is still there (lower left) – and so is Puff the Dragon, after 8 years and more. 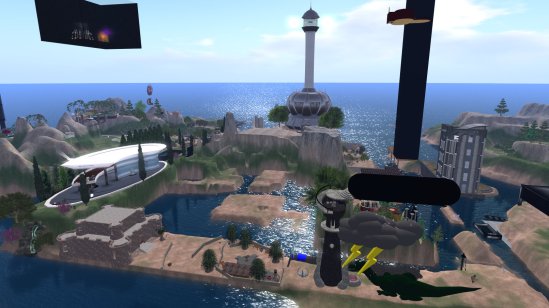 So, yeah… Pathfinding is gonna is still going to need work. But those Resis did that with Version 1.2! (Check what was new with that Release.)

There are artists out there who will grab Pathfinding and run with it — and some of them, eventually, will blow our minds.

Yeah, I know… it’s been a month. But I was also up against the Squarespace renewal deadline, and we know what the outcome of that was — you’re looking at it :) Still not 100%, but presentable enough to begin posting new stuff here, so…

Last year, during SL8B, I posted about Linden Lab’s love/hate relationship with how old Second Life is: how they provided the regions and many of the public builds (performance venues and the like), but made no attempt to actually look at the history of the grid they run.

It’s not like they have any pride in how old Second Life is, after all. They might even be a tad embarrassed about how little improvement they have to show for the years they’ve existed… and they should be, even without factoring in the cyclical blunder that Marketplace has become, or the money and time thrown away during M’s years on shiny like SLEnterprise.

“We’re the oldest virtual world of our kind, and some shit’s still broken.” is not gonna be a winning ad campaign…

That’s from May of this year, not long after Teh Lab decided to rescind all support of the Birthday celebrations, except for listing any that Residents might want to do themselves in the Destination Guide. (Anyone have a handle on how well that worked out?)

Lo and behold: take the Lab out of Second Life’s Birthday, and not only did it happen anyway, there were four or five exhibits which intentionally reviewed SL History — and in keeping with this blog’s recurrent theme, they needed one last look.

The first one I visited resulted from an IM from its creator, Campanula Aeon, who pinged me to say she got many hints about pre-Opening days from the Seconderth series here.

The second held a collection of artifacts from prior Birthdays, all the way back to the time capsule “buried” at the first one, in 2004.

DrFran Babcock contributed a bunch of dioramas, where one could pose in historical settings… I had to choose this scene from Luskwood’s 3rd birthday in 2006.

I wish I had remembered to grab the name of the creator of this exhibit — but its content is one of the many free Linden houses that were available in the Elder Days. This one was made in September 2003 by one of the most prolific of the Linden builders, Ryan.

I said “four or five” up above for a reason, because of this last one: 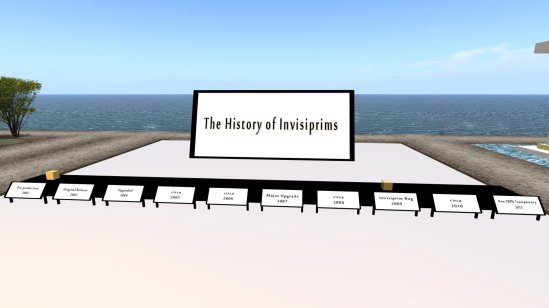 Not what you would call “canonical”, but I loved it because it was so damned silly.

If there’s a lesson to be learned from SL9B, it may be this: “If you want something done right, don’t rely on the Lindens.”

Resis do it better!

If you need more, the full collection of SL9B photos is here.

A bit less than two years ago, I posted the Seconderth entry on Oak Grove, one of the sims added when Second Life went from private to public beta (April, 2003). At seven years old, it still had three builds on it: Busy Ben’s Vehicle Lot, Red Rocks Stage, and Wild West Town. The last, however, had suffered severely from prim evaporation, such that the original Saloon was down to a few dozen random prims, and two or three other buildings were completely gone. 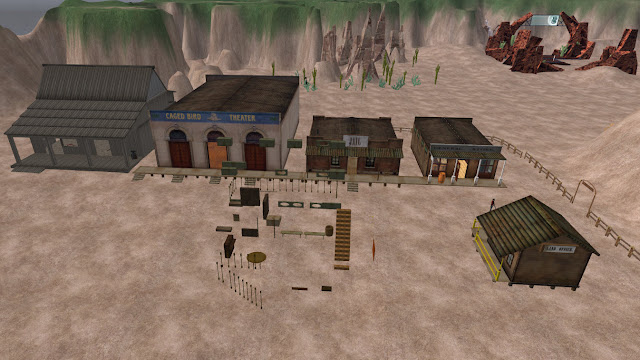 In the comments to that entry, Marianne McCann clued me in to a couple of Mole Islands where both Oak Grove and Rizal were being reconstructed for eventual transport to their places on the main grid. A year later, Rizal was the first of the two to reappear. Turns out, it wasn’t so much a reconstruction as a renovation incorporating some saved elements, but much more visually and spatially interesting than the original. Wild West Town didn’t fare quite so well… and now, despite my respect for the LPDW (in “another Second Life”, I want to be one), I’m in the awkward position of reviewing their work and finding it wanting. 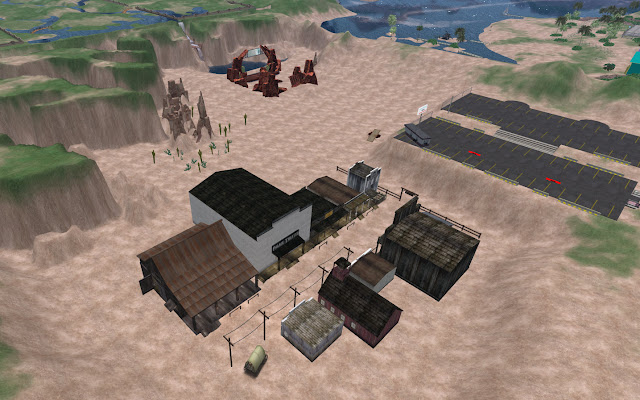 I had hoped for more accuracy – surely the Moles are capable of researching, at least from Snapzilla if not also whatever photo archives the Lab itself might have from those days (and, do they? One wonders…)

I’m not going to bomb this entry with a lot of images – instead, I’ve put them online. The upshot is:

– Four of the buildings there now incorporate prims from the originals, but;

– Two of those have been retextured, to indifferent effect;

– The theater, which was intact two years ago, was replaced completely anyway;

– The Saloon, although in fragments in 2010, was not restored but replaced;

– Three completely new buildings not in the original town plan were added.

Mind you, it’s not all bad work. The school (one of the non-originals) was done with care and whimsy. I can imagine some kid avvies I know having fun RPing there… 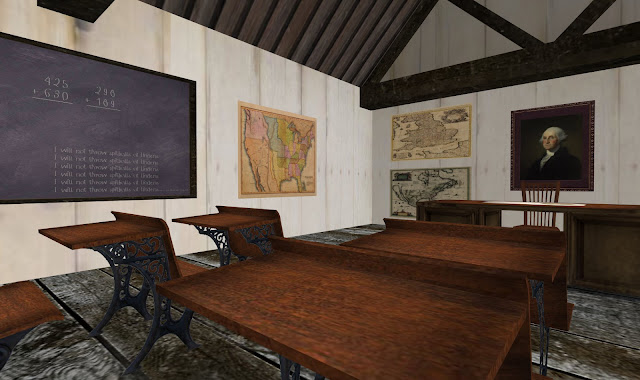 No, my complaint is that it’s lazy work. Floorboard textures are out of proportion; anachronisms appear everywhere; prims were skimped when they needn’t have been… and everything is dark, dark, dark. Even at a midday sun setting, the inside of the Saloon is no easier to see than at the midnight setting.

Maybe because they’re moles, and that’s their natural environment?

By the way, if you go check it out, turn your draw down to 96m or so – especially when facing west: Nexus Prime is right next door in Gibson.