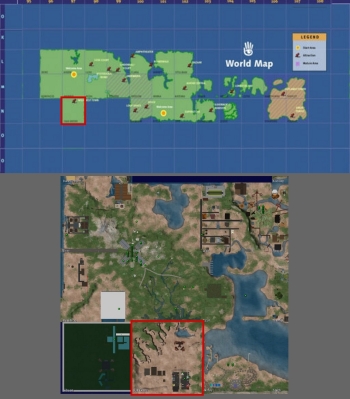 In the January ’03 Grid map (when Clementina and the Luskwood sims were added; see here, for instance), there’s an attraction noted in Zoe that wasn’t there in the November ’02 map:  Wild West Town.  By April of ’03, the map designation had moved to the new region of Oak Grove.  I can only assume that the builds themselves were moved; both the SL Wikia and the official Second Life Wiki are surprisingly silent on the subject of the Wild West Town in any location, and at any age.  This is doubly surprising because “WWT” is the first collaborative project shared by Residents and overseen by Lindens, predating the first Burning Life by a month or two. 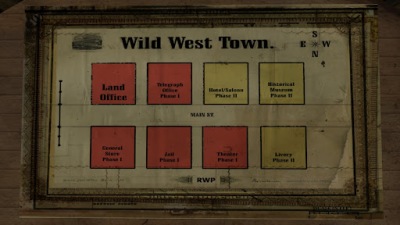 This map is displayed in the Land Office (north is at the bottom; I have no idea why…).  Nearby it is a notecard-giver which still dispenses information from the inception of the project.  It is long, and wordy in a half-chatty, half-condescending sort of way, and full of micromanaging rules about how each of the projects is to be organized, all presented as an awkward blend of Contest and Request for Proposal.  I’m tempted to reproduce the entire notecard here, but I won’t — however, here are some highlights:

1st stage (easiest) – A modular kit of walls, windows, doors, platforms, banisters, roofs, signage, etc, will be provided. The kit will also include some Linden made texture options for the modular pieces. Builders will also be allowed to request additional textures. The Linden matched to that stage will judge them appropriate.

2nd stage (moderate) – Builders will be given a blueprint of the interior structure, but will not be given the primitives to create it. Builders will be required to create linked objects. Again, Linden made texture options will be provided builders can request more. The Linden matched to that stage will judge them appropriate.

3rd stage (hardest) – Builders will be asked to create scripts for features included in the building specs. Hinging and making things physical may also be required. Sounds will be provided where necessary. Creative contribution will be highly encouraged in this stage. If the group has an idea for a scripted feature that was not included in the specs, they will be given Linden help to see it through. If the group has limited script experience, they will be given Linden help.

These were paid contracts, by the way… and:

In addition to money, the group will receive the following:
” A group plaque that will be displayed on the buildings front.
” A space in the town’s historical museum to place an item recognizing your contribution to the building of SL.
” In the case of drag/droppers and copy/rotators, your names displayed in the museum.
” The distinction of being the first residents to participate in a RWP. [Resident Work Project]

If they ever got their plaques, those are not still affixed to the buildings. 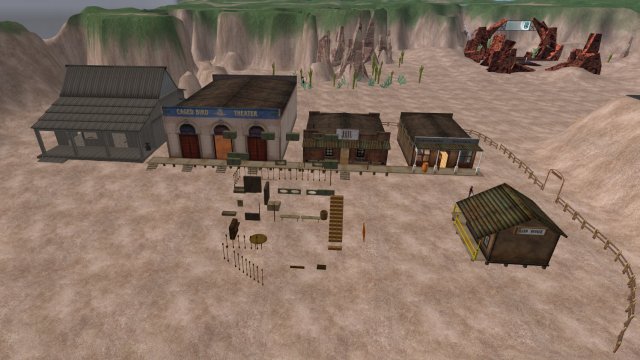 North is at the top in this photo, taken in April 2010. All of the buildings along that side, both Phase I and II, stand more or less undisturbed.  The south (nearer) side has not fared so well.  The Telegraph Office is completely gone.  If the Museum was ever built, it’s gone now, too.   What remained of the Hotel/Saloon when that photo was taken… well, you can see. 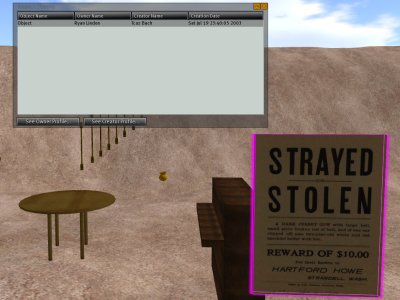 “Strayed or Stolen” – good question.  Whether victims of prim impermanence, repeated hiccups during region restarts, outright theft back in the days when prims were “taxed”… who knows? It hasn’t stopped.  See the brass spittoon in the background of the above photo?  As of yesterday (August 6, 2010), that’s all that’s left.

With the silence of the Wikis (a good film title, perhaps), not much opportunity for further research exists, unless or until some oldbie comes along and volunteers first-hand accounts.  In fact, I have a particular oldbie in mind, one who I know reads these entries because she has commented once or twice:  Marianne McCann.  She may not have been among the avvies who built WWT, but she has cared enough about this site in particular — as well as historical preservation in general — to file JIRAs on the matter; in this case, MISC-1073, originated on April 4, 2008 and still open.

I have mused in these pages before (for instance, the entry on SL’s Welcome Areas) about Linden Lab’s commitment to historical preservation. I am more of the opinion now that such evidence as may exist — which I mistakenly interpreted as “preservation” — is purely accidental, owing more to the lucky absence of damage in spite of neglect than to an effort of any kind to preserve historical builds on “Linden Land”. I found the JIRA about Wild West Town on this entry in the official SL Wiki: Damaged/Non Working Linden Content Locations, by Kokoro Fasching (last updated 18 February 2009). Kokoro makes a piquant comment in the course of listing his findings:

Moles are not fully equipped for maintenance of builds. They can build new stuff, but legacy stuff typically requires the hand of a Linden to repair. As such, moles can build huge projects like the Blake Sea or the cities with a lot more ease than they can fix even simple legacy content.

In the state of affairs within Linden Lab itself as of this writing, with speculation about its survival (therefore, of Second Life) being no longer unwarranted, concern over the preservation of seven- and eight-year-old constructions which will all disappear When The Plug is Pulled seems… well, somewhat reduced in importance. It seems increasingly probable that in a short time, all that will remain of anything in SL is the written and graphic records. As Mr Samuel Johnson said about an impending death sentence…

Time to get off the soapbox and back to the task at hand.

There are two other builds in Oak Grove. One may be familiar to many: Busy Ben’s Vehicle Lot:

The infrastructure (tarmac and signs) are by Ryan Linden (Nov/Dec 2003).  The land itself is listed as being owned by Char Linden, and people intersted in leasing lot space to show and sell their vehicles are supposed to contact Mia Linden… do either of those two still exist?

Finally, off in the northeast corner, the Oak Grove Stage (presumed to be reminiscent of Red Rocks in Colorado):